Eras In search of Results About Project
Kz Ru
|
Authors:
David Kaminsky
Adilzhan Psyayev
David and Adilzhan not only research architecture but practice it as well, though it is their fanatical interest in issues of architectural heritage, their scrupulousness in working with documents and their boundless love for Almaty that brought them to the project.
In the course of our work, we collected a wide variety of materials from every possible source, from archives to books to even postcards. We now have a complete picture of the cinema's history and best possible idea understanding of its "crown" - a decorative wrought iron railing that originally encircled the roof. Previously these materials were not widely available and many of them are being shared with the public for the very first time.

It was possible to find only the original version of the "crown". 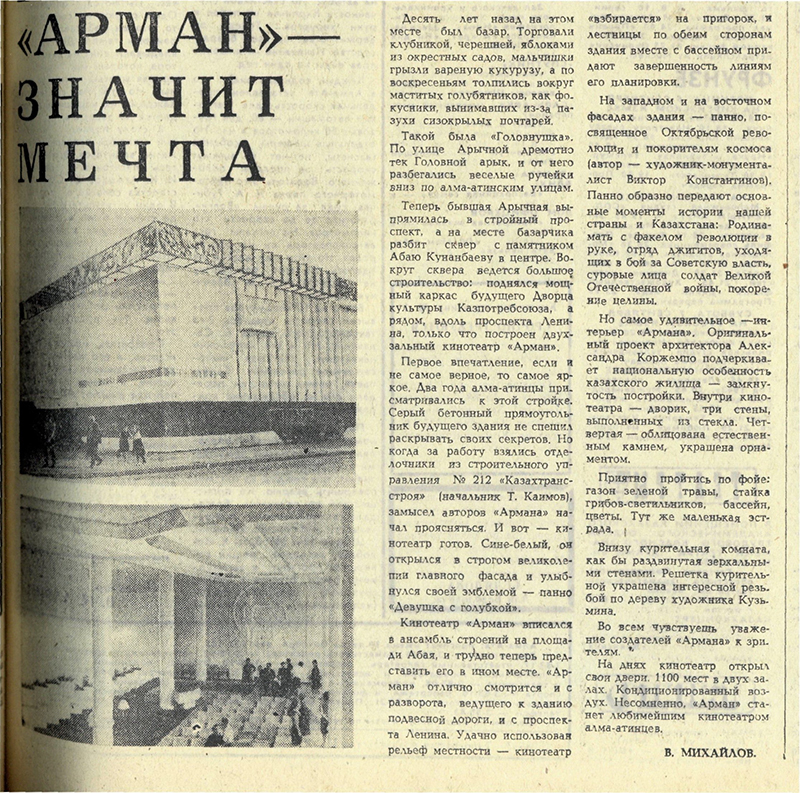 “
For the version that was implemented, we could only find photos and videos that allow us to restore its overall appearance. The original plans of the "crown" are not available in the city archives. According to Aleksandr Korzhempo, they were supposed to have been preserved by the Union of Artists, which made it, but the materials there were lost.
Archival documents such as directives, evaluations, and orders were collected in the Central State Archive. These materials are unique because they allow us to restore a timeline of the the cinema's construction, as well as the logic in the evolution of its design. For the first time, the document deciding to allot land on Abay square, dated October 2, 1963, allowed us to set a starting date for all work related to the cinema. In addition, the materials mention the cinema's initial design characteristics, such as its 800 seats (in the ultimate version it was given 1,000 seats), as well as having two theatres with different sizes (in the end, the two theatres were of the same size).

Based on the decision of the Almaty Executive Committee No. 123, we learned that the decision to name the cinema "Arman" was made on April 14, 1967. Until that moment, it was simply called "the cinema on Abay Square".

The official identifying document, or "passport," of the architectural monument "The Building of the Arman Cinema" confirms that the "crown" encircled the roof of the building around its perimeter. The document, in particular, states: "To increase the height of the cinema, metal ornamental grilles were introduced into its composition, completing the building along the perimeter". This passport - proof of the building's official status - is now in the hands of the building's owner for the first time.
We received copies of plans for the draft project of the cinema from the Central State Archive of Scientific and Technical Documentation of the Republic of Kazakhstan. They include a layout of the site, variations for the facade, floor plans and individual architectural details. These reflect the original intent of the architects.

The most striking difference is the original texture of the facade. Here, the plaster facade is divided into many rectangles, stacked in a geometric pattern. In addition, the drawings show two suggestions for bas-reliefs on the side facades. 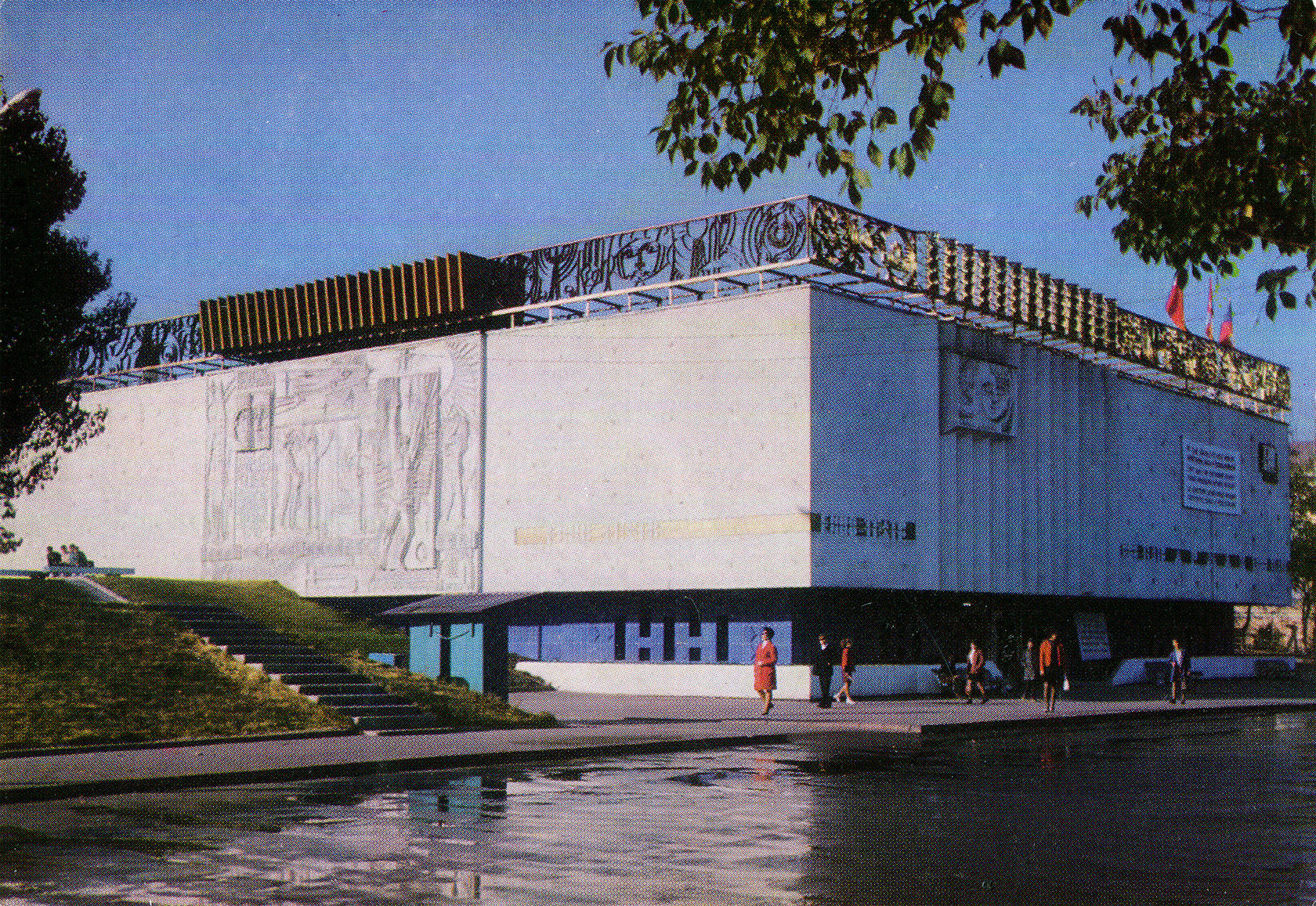 “
According to early drawings, the original installation of the building's "crown" was not planned. A design similar to it is found in a later drawing showing an arrangement of decorative elements on the facade. There, the building is crowned with thin stripes, presumably of neon lights. On the side facade, they form the inscription "ARMAN CINEMA".
The drawings of architectural elements also include: an advertising stand formerly installed in front of the building; the original design of the entrance doors; "mushroom" lamps formerly installed in the cinema courtyard; the "slow core" elements which were fixed above the screens in the theatres. In the future, it is possible to restore these elements as well.

Also according to the acquired drawings, the facade carries the earliest (likely informal) name of the cinema – "Alma-Ata".

Several films were retrieved from the Central State Archive of Film and Photo Documents and Sound Recordings of the Republic of Kazakhstan, in which it is possible to see the "crown". In individual frames, it is shown in detail, allowing you to recognize the picture. 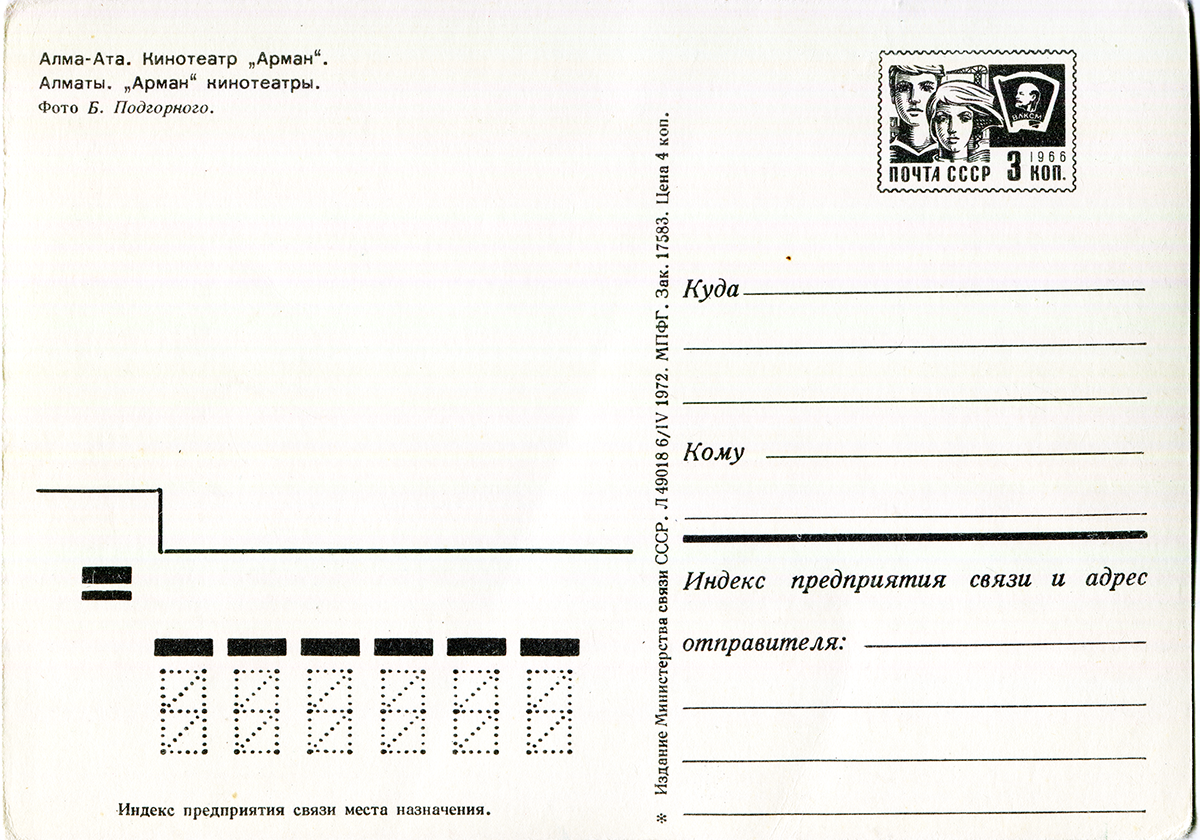 Edition No. 26 of the newsreel "Soviet Kazakhstan "(1968, Kazakhfilm) tells of the cinema's establishment and, in addition to the facade, the interiors of Arman are shown in detail.

The film "Monumental Art of Kazakhstan" (1976, Kazakhfilm, dir. G. Yemelyanov) is focused on the bas-reliefs of the side facades, but also it makes possible to see in detail the brise soleil sun blocks installed above them that were part of the "crown".

Photos were obtained for the first time, on which the building can be viewed in detail from all sides, which gives the widest possible picture of its original form (at the time of shooting in 1991) and allows restoring an image of previously invisible sections of the "crown".

A postcard we scanned in the original resolution, along with the reverse side, suggests that the site became iconic soon after the completion of construction.

Photos from the little-known book "Town Planning of Kazakhstan" (1973, Kazakhstan Publishing House) give an idea of the courtyard's original appearance, including the original lamps shaped like mushrooms and a bas-relief on the side facade.

The article "'Arman' Means 'Dream'" in the "Evening Alma-Ata" newspaper records the date in history when the cinema was founded - September 6, 1968. Together with newsreels about the establishment of Arman, it allows one to sense the significance of the event in the life of the city.
The materials found by David and Adilzhan can be found in the “Results” section